Looking back at VeeamON 2017, New Orleans 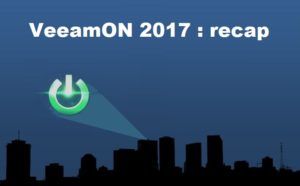 Sad but true, VeeamON 2017 is already behind us.

Thanks to the Veeam Vanguard program I was able to attend Veeam’s conference this year for the first time.

And so I want to write down some sentences about my experience during the four days in the beautiful city of New Orleans.

The event took place from May, 16 – 18 in the Ernest N. Morial Convention Center, directly on the banks of the Mississippi river.

I was surprised to hear, that New Orleans Convention Center is the sixth largest convention facility in the US, and that it ranks in the country’s top ten of facilities that hold the most conventions and tradeshows annually.

But the more time I spent in the city, the more I understood why it is so ideal for big events.

Many internationally known hotels are situated in walking distance to the venue. In addition, the city offers many options for a night out: culture, music, bars and restaurants – perfectly suitable for networking events after a long conference day.

With approximately 3,000 on-site attendees, the conference had a really comfortable size.

It reminded me a little bit of the spirit of the first VMworlds in Europe, 2008 and 2009 when these conferences were smaller and more familiar. 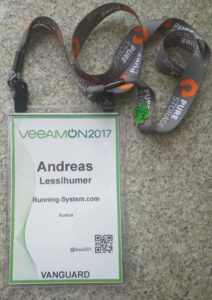 Day 0 (Tuesday) was Partner Day and not open to the public. For the Veeam Vanguard group, Rick Vanover (Director of Technical Product Marketing & Evangelism) and his team organized a Vanguard Exclusive Content Day at this day.

Besides other interesting slots, the highlight was an “Ask me anything” session with a panel of well-known persons like Anton Gostev, Danny Allan, Mike Resseler, Andreas Neufert and some more.

The next two days (Wednesday and Thursday) were open to all attendees and started with two hours long general sessions every morning. This was the time, where new features and products (eg. Veeam Availability Suite 10) were announced. I will cover them in an extra blog post later – you can find the link here as soon as available.

For the rest of the day, a varied program was offered to the attendees: 85 breakout sessions, Hands-On Labs, Lab Warz and an Expo Lounge with more than 40 vendors.

I attended four to five breakout sessions every day. Some of them were high valuable for me. Unfortunately, there was also a small number that I would have missed.

In the evenings a well-organized gathering and party program were offered, perfect for networking and fun:

At Wednesday night the four Premier Partner Parties took place, powered by HPE, Microsoft, NetApp, and Cisco. They ended at about 10:00 pm, but most attendees let the night fade away on Bourbon Street. The party mile of New Orleans.

The conference ended Thursday night with a big VeeamON Party at the Generations Hall. It was a well-organized event, with Food Trucks, entertaining bands and best conditions to get in touch with other attendees.

My recap of the conference

Veeam did a great job and it was definitely one of the best conferences I attended in the last years.

Looking back at the days in New Orleans I noticed that I was not able to attend all the sessions and activities I planned. For the various program offered during the conference, two days is a little bit too short. A third day would be great 🙂

But of course, I understand that this means a lot of more work and higher costs. On the other side, the event has the potential to become one of the Go-To Conferences. And the third day would improve the travel time vs. conference time balance for the attendees.

One minor detail that I missed at the conference was a hang-out space with tables and power sockets to gather with peers or just to sit down and check emails.

Overall, it was a great and memorable time in New Orleans I would not want to miss. I learned a lot and met many awesome people from all over the world I already knew but also many I did not know.