Update 25/06/2016: VMware published a KB article covering the issue described in this blog post two days ago (VMware KB 2145895).  If you read the KB and the post carefully, you will find some differences.  Eg. VMware states in the KB: “No data is lost. Due to this issue, incremental backups are effectively full backups.”  As I have seen various affected virtual machines where the backup was not equal to a full backup, I decided not to change the blog post. I still recommend performing a CBT reset to ensure that you can rely on your backup.

Just a short notice if you are already on ESXi 6:

There is an issue with Change Block Tracking (CBT) in Express Patch 6 for ESXi 6 (Build 3825889) that can affect your backup if your backup software relies on CBT.

You can find errors in the vmware.log of the affected VMs similar to:

vcpu-0| I120: SNAPSHOT:SnapshotBranchDisk: Failed to acquire current epoch for disk /vmfs/volumes/
vmdk : Change tracking is not active for this disk 572.

There are currently 2 workarounds available:

If you already have affected virtual machines, migrate them to a host using an unaffected ESXi version (eg. VMware ESXi 6 Update 2, build 3620759).

Here you can find a short description: How to rollback/revert to a previous ESXi Version 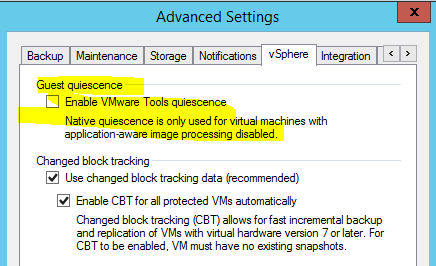