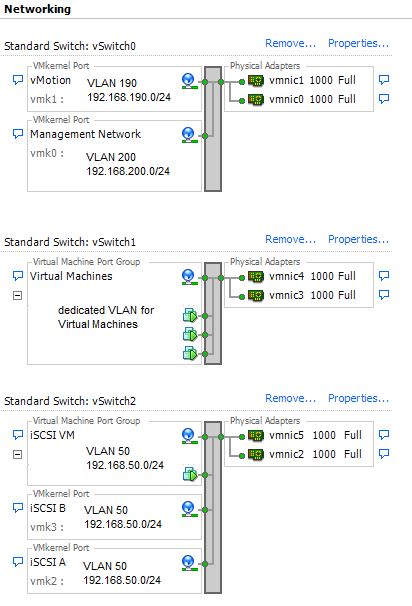 When configuring the network, please note that it is necessary to enable FlowControl for the iSCSI ports.

You should invest some time in your LUN design. In the example described in this blog post I configured only two LUNs:

VMware vSphere HA is part of the VMware ROBO license. In this use-case this important feature was configured as follows:

Consideration why using „Power off“ as Host Isolation Response:

Let’s better start with the reasons why I do not want to use the other response possibilities:

Shut down:
In a host isolation scenario, VMs running in the affected site will experience I/O failure as the VSA stops to operate. So a clean shutdown is not possible.

Leave powered on:
In a host isolation scenario, VMs running in the affected site will experience I/O failure as the VSA stops to operate. HA will restart the affected VMs on the host in the surviving site. After failed node comes back online, the same VM is running on both sites and you may experience a split brain scenario in the worst case.

Last but not least my consideration why I decided to use „Power off“:

VMs running in the affected site are powered off and HA will restart them in the surviving site. After the failed node comes back online, all affected volumes resync automatically.